When Stephanie Cate walked into Winston Bao Lord’s Georgetown home for a party five years ago, he had already been named to a People magazinelist of the country’s up-and-coming men that included the actor Bradley Cooper. And Mr. Lord had been selected by The Washingtonian as one of the capital’s most stylish men.

Despite those accolades, it didn’t make lining up a date with Ms. Cate any easier.

“There were probably 30 people at that party,” said Mr. Lord, who shares a name with his father, a well-known American diplomat. “Stephanie just stood out.” But she had little interest and barely stayed long enough to finish a drink.

Undeterred by her disappearing act, Mr. Lord set off on a dogged five-year pursuit. He tried reconnecting with her through the friends who introduced them, suggesting that a “spare” concert ticket go to Ms. Cate. He encouraged their friends to take her to the Washington Ballet’s annual Jeté Society party, where Mr. Lord is a board member. Neither worked. 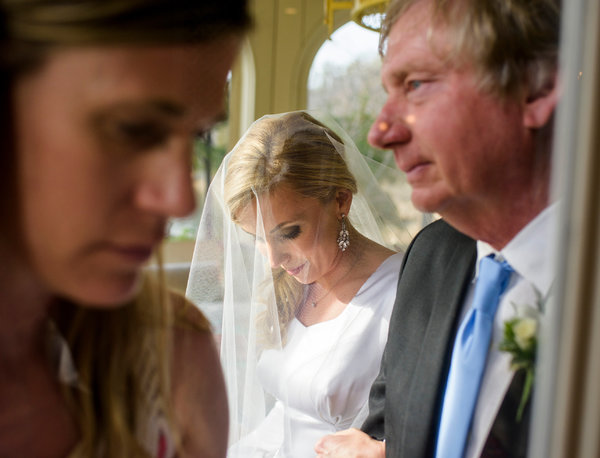 Tim Cate walks his daughter to the altar. CreditMatt Roth for The New York Times

Ms. Cate, who had only a faint recollection of Mr. Lord or his party, was too busy for fate. When she had free time, she was studying for a master’s in international development from American University.

On top of that, she was working full time as the executive director of the Batonga Foundation, a nongovernmental organization founded byAngélique Kidjo, a Grammy-winning singer from Benin, that seeks to empower women and girls in African nations.

“I didn’t have time to invest in a relationship then,” said Ms. Cate, now 32. “Even if we had tried, I don’t think it would have worked.”

So he backed off, focusing on helping to establish a services company for restaurants, called Venga, that tracks diners’ preferences and habits. He also traveled the world for work and play.

Winston Bao Lord grew up on a stage, shaped and colored by international politics. His mother is Bette Bao Lord, the Shanghai-born novelist.

His father, also known as Winston Lord, was an adviser to Henry Kissinger and President Richard Nixon. He later was the United States ambassador to China under President Reagan, before becoming the assistant secretary for East Asian and Pacific affairs under President Bill Clinton.

Growing up, Mr. Lord tried to beg his way into accompanying his father, who also was once a special assistant to Mr. Kissinger on a secret trip to China. But he was obviously far too young for diplomacy. So Mr. Lord, along with Mr. Kissinger’s dog Tyler, were relegated to rushing to the front of the greeting line at Andrews Air Force Base after the diplomats returned home.

Ms. Cate, meanwhile, had spent her formative years in coastal North Carolina as a daughter of Janet C. Cate, a public school teacher, and Timothy N. Cate, a golf course designer whose projects have included the Tiger’s Eye course at Ocean Ridge Plantation in North Carolina.

After receiving her degree from American University, Ms. Cate was from 2012 to 2013 an American delegate to a program called Young Turkey/Young America that seeks to strengthen relations between the nations.

Though Mr. Lord’s initial efforts at wooing Ms. Cate had gone nowhere, somehow she was always in the back of his mind. Four years after their first encounter, Mr. Lord emailed Ms. Cate with what he hoped would be a can’t-fail-to-impress invitation: dugout seats at a Washington Nationals baseball game. (Mr. Lord had been the executive director of the group that helped return a Major League franchise to the nation’s capital after a 34-year absence.)

They stayed for just one inning, leaving to find a quiet table at a nearby restaurant to continue their better-than-expected conversation. “I remember seeing him that night and instantly feeling so comfortable,” Ms. Cate said.

They closed the restaurant while discovering they shared a love for travel, philanthropy and volunteerism.

Mr. Lord also learned that high-profile events, important friends or expensive dinners were not the way to get her attention. Their second date was for a volunteer shift at the DC Central Kitchen, where Mr. Lord is also a board member. He watched in awe as Ms. Cate, who is a vegetarian, threw on a hairnet and chopped up some venison. “I just realized, this was going somewhere pretty fast,” said Mr. Lord, now 47.

The pair began dating, bringing some relief to their mutual friends who had been roped into Mr. Lord’s schemes to get him and Ms. Cate in the same room.

In the weeks after their soup-kitchen date, she traveled to Egypt for two weeks as part of a fellowship program She figured he would let the new relationship fizzle.

But there was Mr. Lord, sending her a steady stream of messages in which he sought to brainstorm ways for her to get the most out of her experience in Egypt. They became so engrossed in this exchange that her new friends in the fellowship teased her because she always asked for the Wi-Fi password at restaurants so she could contact Mr. Lord.

Upon her return to Washington, the two drew much closer. On a subsequent date, a visit to Connecticut, they traced Mr. Lord’s lineage and explored the bridges, coves and pubs named after his ancestors, including Thomas Lord, who in 1636 helped establish the Colony of Connecticut.

Just six months after their ballgame date, he began putting together plans to propose.

He knew that Ms. Cate’s favorite place in the world was Bird Island in North Carolina, an uninhabited strip of land just a short bike ride from her hometown, Sunset Beach. For more than 35 years, locals and others have gone there to look out at the water and visit a rickety old mailbox called the Kindred Spirit, in which people leave anonymous messages and stories about their lives.

It was here that Ms. Cate would go to contemplate her future, mourn big losses and celebrate private wins.

While visiting her parents on Thanksgiving weekend in 2014, Mr. Lord put in the mailbox a five-page letter he had written explaining why and how much he loved her. Nestled beside it was a velvet-lined box holding the ring (guarded by relatives who hid behind a sand dune).

He lured Ms. Cate from her parents’ home for a bike ride to Bird Island, where Ms. Cate began reading from the letter he had left in the mailbox.

Just as she was getting to the second-to-last page, Mr. Lord noticed a man and his daughter walking toward them. Thinking they would blow his perfectly planned proposal, he tried to discreetly signal them.

The man instead pulled out a camera. He was a professional photographer, and rather than ruining the moment, he captured what Mr. Lord described as some of the most beautiful moments of his life.

They were married on April 18 at the Annapolis, Md., home of the groom’s best man, Jeffrey Zients, who is director of President Obama’s National Economic Council.

It was one of the first warm days of a cold, rainy spring. Angélique Kidjo sang what she called “a blessings song,” eliciting rousing applause from everyone who wasn’t clutching a tissue to their chests.

The couple then recited their vows as they faced Hannah Jane North, a Universal Life minister, as well as the gentle flow of Meredith Creek, under an arc of driftwood made by the bride’s father.

So just what was it that Mr. Lord wrote in the letter he left for Ms. Cate in the Kindred Spirit mailbox? Among the thoughts he recorded were: ”It’s amazing when you fall in love and know you want to spend the rest of our life with that person.” He also noted, “I didn’t need my mom to tell me that Stephanie reminded her of herself.”

But Ms. Cate had already discovered other kindred spirits in the Lord family line.

“After we were engaged, I found a picture of Winston’s grandmother Mary Pillsbury Lord, meeting with the office of the Ministry of Tourism in Cairo,” Ms. Cate said. “Mary was an heir to the Pillsbury fortune but started her career as a family welfare worker in Minneapolis and Harlem. She rose to become President Eisenhower’s United States representative to the United Nations Human Rights Commission. After speaking to Winston’s father, I knew that supporting strong women was something that ran in their family.”